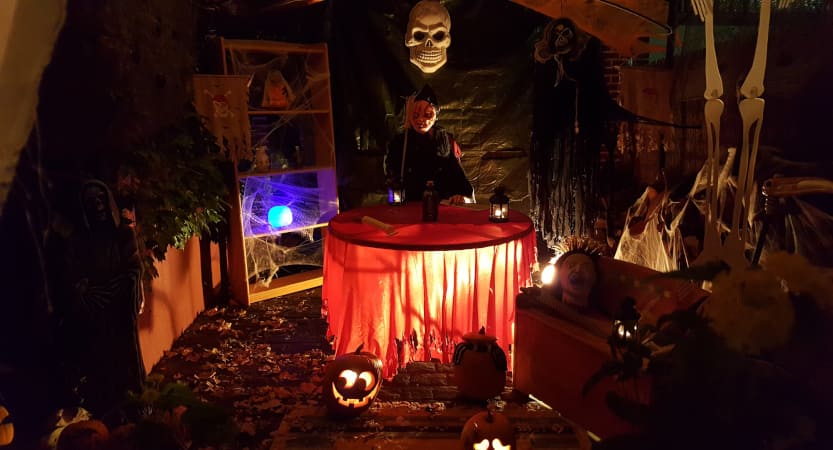 Photo by It's Not Just English in Rivas-Vaciamadrid

As you probably already know, Halloween is a holiday celebrated on October 31st, the evening before “All Saints’ Day“, or “All Hallows’ Day“. That evening was known as “All Hallows’ Eve“, and its contraction is “Halloween”. The period from October 31st to November 2nd was known as Allhallowtide.
Although some people think that the origin of Halloween comes from America, the fact is that, its origin comes from the ancient Celtic festival of Samhain, when people light bonfires and wear costumes to keep away ghosts.

Samhain, pronounced SOW-in, SAH-vin or SAM-hayne, is a Gaelic festival which mark the end of the harvest season and the beginning of winter or the “Darker Half” of the year. In fact, Samhain means “End of Summer” and it is one of the four Gaelic seasonal festivals, along with Beltane, 30th April/1st May, Lughnasadh, 2nd/4th August, and Imbolc, 1st/2nd February.

Historically, it was widely observed throughout Ireland, Scotland, Isle of Man, Wales and so on. But Samhain is believed to have Celtic pagan origins with evidences such as Neolithic passage tombs in Ireland, earliest Irish literature or Irish mythology.

People lit bonfires in the hills to scare away evil spirits and sometimes wore masks and other disguises to avoid being recognized by the ghosts believed to be present.

Is Halloween an American holiday?

In the second half of the 19th century, America was flooded with new immigrants. It should be noted that by the early 17th century, European immigrant communities already dotted the east coast, including the Spanish, the British, the Dutch, and the Swedes, many seeking religious freedom or greater economic opportunities. These last new immigrants, the millions of Irish fleeing the Irish Potato Famine, helped to popularize the celebration of Halloween nationally.

In the early 20th century, Irish and Scottish communities revived the “Old World Traditions” and by the 1920s, pranks had become a tradition. Currently, Americans spend more than $6 billion annually on Halloween, making it the country’s second largest commercial holiday after Christmas.

We should not forget that, Halloween is more a traditional festival closely related to the religious holiday of All Saints Day. Halloween in Spain is a three-day celebration, starting on October 31st with “El Día de las Brujas” (Day of the Witches), followed by “El Día de Todos los Santos” (All Saints Day) on November 1st and the celebrations are concluded on November 2nd with “El Día de los Muertos” (The Day of the dead).

Believe it or not, Halloween is widely celebrated in the north, more than any other area of Spain. Here, the Celtic tradition of Halloween still has an influence to this day. One good example of this is Galicia, well-known for its rich folklore and ghostly legends, which on October 31st celebrates “Noite dos Calacús” (Night of the Pumpkins) with the rest of the world, and even the Queimada, which is a punch drink unique to the area, is traditionally prepared within a pumpkin and consumed after reciting a spell known as “esconxuro”.

But other places celebrate Halloween such as Cádiz, called “Fiesta de Tosantos“, with street performances, concerts, parades, children’s activities and market stalls doused in fruit, vegetables and other products decorated to resemble characters from recent political and other scandals. Or Sant Feliu Sasserra, a small town in Catalonia, where its inhabitants recreate the 17th century, a time where 400 women were accused and murdered for being considered witches. Or Málaga, where Halloween is celebrated with a large Zombie March through the streets and all the participants of this frighteningly colourful procession are dressed as witches, goblins, vampires and other creatures we associate with Halloween. And what about San Sebastián? Halloween in San Sebastian coincides with the annual Horror and Fantasy Film Festival, which, in addition to cinema, brings lots of concerts, exhibitions, and theatre performances to the city’s elegant streets.

As you can see, over the years, Halloween has been celebrated somehow or other around Spain. Maybe, “Trick or Treat”, this tradition of unknown origin which was firmly established in American popular culture in the mid ‘50s, was the recent adopted activity for Spaniards.

In Spain this custom is growing and it is common to see groups of children going door to door, especially in large cities where the American cultural influence is greater. Every October 31th at dusk, Halloween enters its peak, for both children and adults. They go through the streets, with their terrifying disguises on and their pumpkins crying “Trick or Treat”. Tradition demands that the owner of the house give in to blackmail, giving the children all kinds of Halloween sweets.

Contrary to what some people say, if Halloween should be a Spanish holiday or not and even if Halloween hurt their feelings when they are very religious, I love it. Maybe because of my children, who have enjoyed Halloween so much every year, and keep on enjoying it. A month before Halloween, they are already organizing their costumes or watching videos to catch some ideas. Halloween is a special night for them. They go door to door for a couple of hours crying “Trick or Treat” with their friends and after that, they all spend hours watching horror movies and eating pizza and sweets.

Another important thing is that, I live in a neighbourhood where everybody does one’s bit. It is worth seeing. Everybody decorate their houses, create horror passages, spectacular light and sound shows, and even a BBQ.

People who come from other neighbourhoods see with complete amazement our performance, even sometimes, children run seeking refuge in their parents because the situation is very spooky. Despite the initial shock, people are down-to-earth and have fun with family and friends.

But this year looks different. The Coronavirus pandemic has changed the way we work, we study, we interact with other people, even Halloween will suffer some changes. Probably, “Trick or Treat” will look a little different this year, maybe full of zombie-medicals, wearing their hygienic masks. But although Halloween is one of the most festive times of the year for children, this year, going door to door is not advisable.
This is a Halloween to stay at home, watching slasher films such as “Halloween” by John Carpenter, “Scream”, “Nightmare on Elm Street” or “Friday the 13th”. But if you think that these movies are too gory for your family, movies such as “The Addams Family”, “Ghostbusters” “Beetlejuice”, “The Nightmare before Christmas” or “Corpse Bride”, among others, are waiting for you.