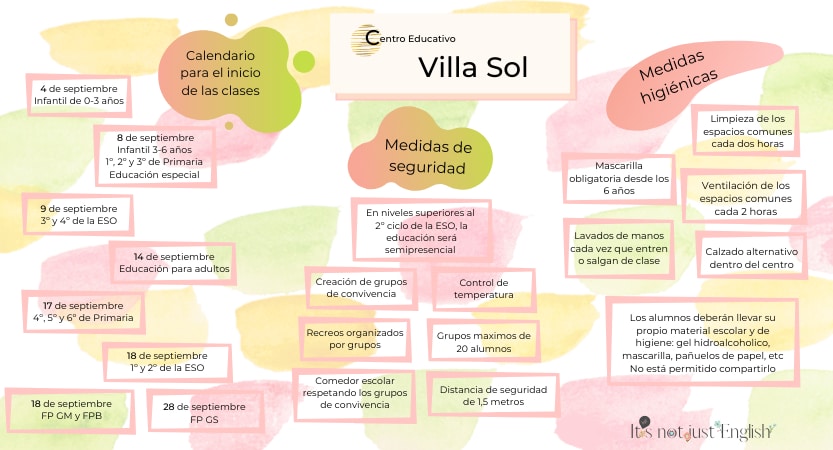 Photo by It's not just English

Mediation is a new ability at the language school since 2019, the fifth to be precise, in which a text or video, in English or Spanish, has to be transmitted in English either through an e-mail (although it could well be an article indeed), or orally. Well, at least that is what I have seen so far, which it hasn’t been for long.

When you write a mediation, you do not need to summarise all the information given. You only need to give the main points which might suit better with the person to whom the information is sent, according to their interests, hobbies, knowledge, requests and so on.

Write an email to your friend, 200-220 words, following the instructions given, including any aspect that you think may be useful for her and her family. At the end of this post, you will find information about how to write a letter and its structure.

You have a 45-years-old British friend, Mary, who is going to move to Madrid with her family, since her husband is going to start working in a Spanish company.

Recently, she has received a letter from her children’s school in Madrid, explaining the new rules to follow within it and she doesn’t understand Spanish well enough, So, she has asked you to summarize the most relevant information for her, because she is very concerned about this new school term, like no other, due to pandemic.

How are you doing? I’m counting down the days until you come here. Are you ready to live in Madrid? Everything is ready here for your arrival.

I’ve received a copy of the rules of your future school in Madrid and as I don’t want to bore you with unnecessary rules, I’m going to explain you the most relevant aspects and rules that can directly affect you.

Regarding starting dates, the first one to start her classes is Alice, on 9th September. Mary, you are the second one, on 14th September. Edward is the third one, on 17th September and the last one is Paul, on 28th September.

As far as security measures is concerned, there are some important aspects. For example, the school is going to create different living groups with a maximum of 20 students, to control them during the break on the school playground or canteen. In addition, Paul, Alice and you are going to have a semi-distance education. Besides, the school is going to control the temperature of every student and it’ll be mandatory to maintain the 1.5-meter social distance.

As regards sanitary measures, every child has to take their own face mask, an alternative footwear to be used in the school and their own school material. Additionally, to avoid the spread of the Covid-19, the school is going to clean and air out the common spaces every 2 hours.

Well Mary, I think that is all. If you had any further questions, please, let me know, it’ll be a pleasure to help you.

I hope to see you very soon.

Are you ready for adventure?

Hi Mates, This post was specially made for you. #